Just imagine: the tonality has just been created that has grown to become the new standard for all composers of the Baroque era. Rameau had just been the first to formulate the strict laws of tonality. Scarlatti, too, surrendered entirely to tonality in the early period. This early period in Scarlatti's composing ranges from K1 to K95. It is also the only period of his career in which pieces for a solo instrument with harpsichord accompaniment were created, namely the sonatas K73, K77, K78, K80, K81, K88, K89, K90 and K91. It can be assumed that these sonatas were written at the Portuguese court, where apparently a member of the royal family played a melody instrument. The solo instrument was a violin, as can be clearly seen from the few double stops and chords in the solo part. These duo sonatas are conceived as the only sonatas to be accompanied by basso continuo. They are the most baroque sonatas in Scarlatti's oeuvre. This suggests that they are commissioned works. Where Scarlatti was able to compose freely, his works show completely different qualities. One should keep this point in mind. Through his employment first at the Portuguese and then at the Spanish court as a music teacher, Scarlatti was able to compose whatever he thought was right. Incidentally, some of these duo sonatas are composed in several movements and thats unique in Scarlatti's sonatas.

Even in this early period, the sonatas for solo harpsichord are much more interesting.

Scarlatti originally called these compositions "Essercizi" (K1 - K30) - that is, exercises, the term "sonata" appears afterwards in his manuscripts. This suggests that these compositions were originally created for teaching purposes. Their musical content, however, extends much further than that of the common etudes of later epochs - think of Czerny or Cramer, especially the etudes of Czerny, Beethoven's pupil, are of no great musical value. Scarlatti's sonatas - insofar as they are to be understood as exercises - are exercises both in terms of playing technique and music. Both elements are completely equal.

Scarlatti did not really use the modes mentioned, but his understanding of major and minor as derivations from the modality is certainly interesting and gives food for thought, also where the interpretation is concerned.

Even in the later periods, this method of key signatures appears occasionally, especially at the beginning.

The formal layout of most of the early period sonatas is very simple. The pieces are in two parts, the second part is a variation of the first. Often the main motif appears at the beginning, which is then treated imitatively in the second voice. An example:

Bars 9-12 are the echo of bars 5-8. These echo effects play a major role in Scarlatti's music. Reference is made to it frequently in the following.

Another example of the genus chromaticum can be found in the fugue K58 (To the score). Incidentally, this sonata is a true polyphonic masterpiece and also one of the very few minor sonatas that end with a major chord. As an example, the first bars:

As an example for the virtuoso treatment of chord breaks, K10 (d minor - Presto) (To the score) may serve:

There are regular passages in Scarlatti's sonatas where one hand is in absolute counter-rhythm to the other. An early example is K14 (G major - Presto) (To the score):

Incidentally, this sonata is the first tarantella in Scarlatti's work.

In K32 (d minor) (To the score) the minuet type appears for the first time in Scarlatti's sonatas. This short piece is of such melodic beauty that Scarlatti called it "Aria" rather than "Minuet". This beautiful piece deserves to be quoted in full: 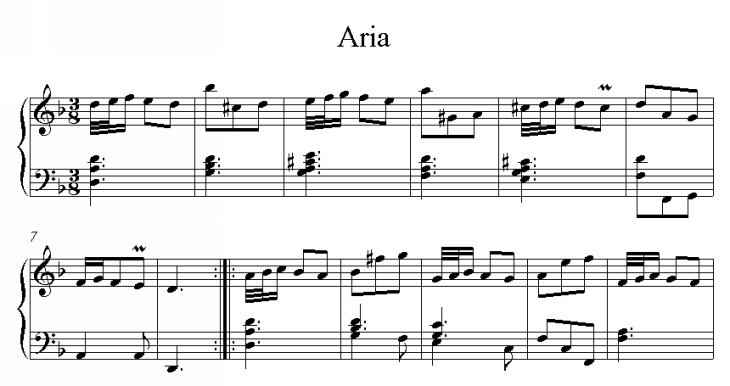 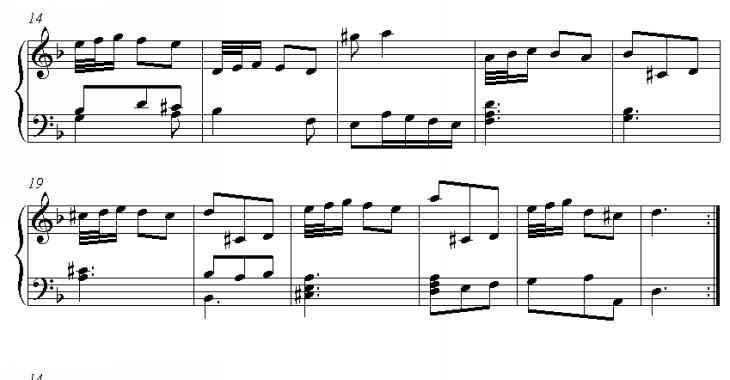 In some of the early sonatas the "Neapolitan sixth" appears, not only as a cadenza but also, which is remarkable, as a loose melody tone. Both forms appear in K34 (D minor - Larghetto) (To the score)::

The Sonata K62 (To the score) is not in the right place in the Kirkpatrick catalog. Stylistically, this sonata belongs to a later period, namely the early Spanish period. Bars 19-30 prove that:

Typical for the early period is rather K72 (To the score), a celebration of the joy of playing:

The fugue K87 (To the score) is undoubtedly one of Scarlatti's strangest compositions. The usual structure (one-part, two-part, three-part, four-part) is not present. From the beginning there is four voices. There are also several themes. This piece is both a fugue and also not a fugue: 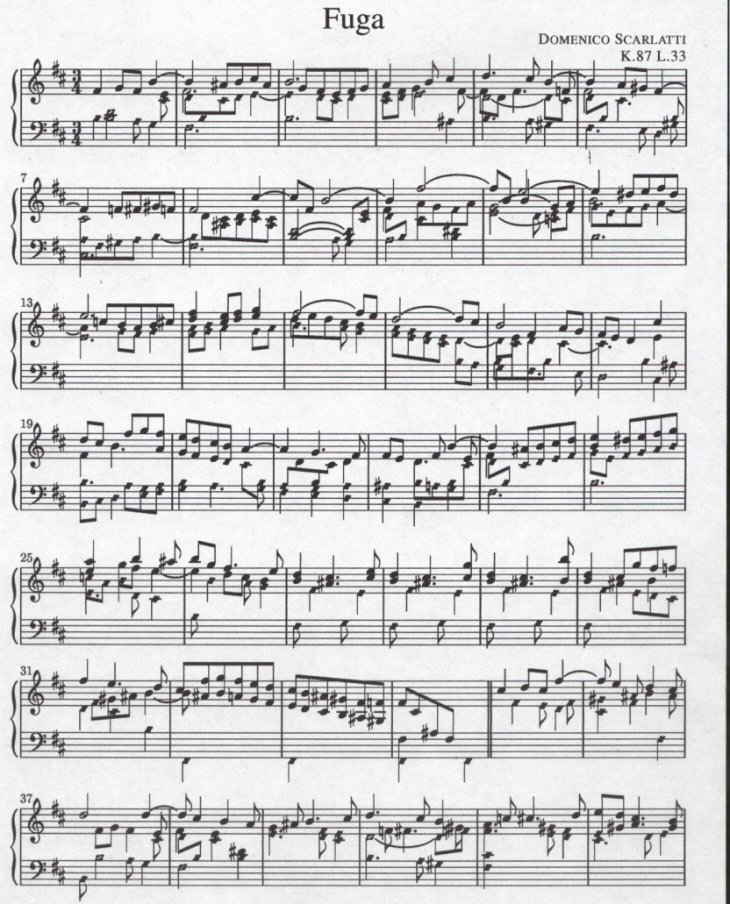 A strange passage from the minuet K94 (To the score) must not go unannounced. As if out of nowhere in the completely "normal" course of the music suddenly a place appears where the peculiar chromatic melody course lets the "ordinary" harmonization appear in an iridescent light:

If one compares K95, the last sonata of the early period, with K96, the first sonata of the Spanish period, one could speak of a stylistic break with a little bad will. However, this is not the case, one should speak of a style enrichment. What Scarlatti owes to the knowledge of Spanish folk music and thus the musical world Scarlatti is examined in the following chapter.