From K300 to K399 we are talking about a period in Scarlatti's composition that is characterized by the pursuit of the greatest possible musical transparency and clarity. Just compare the scores of K299 and K300. A difference like day and night. This "style break", which is not one, is just as radical as the already discussed "style break" between K95 and K96. Most of the sonatas in this middle period are in major. That alone suggests that it concerns a happy period in Scarlatti's life. In all other periods, major and minor are roughly in balance. The virtuosity takes a back seat, but that doesn't mean that these sonatas are technically easy to play. The virtuoso never denies himself. Only the virtuosity is limited to individual passages and the clarity of the musical statement is the primary goal. In no other period is the musical transparency as clear as in this one. Most of the pieces are essentially two-part, chords rarely appear, and now and then three parts are achieved. The influences of Spanish folk music also fade into the background. Sometimes only a single passage reminds of Scarlatti's love for this music.

In this middle and also in the late period I content myself with the precise analysis of one sonata each time, as a substitute for all the others. Other sonatas of this middle period are quoted in the chapter "General Remarks".

K394 (E minor - Allegro) (To the score) is chosen as a representative for all sonatas of the middle period. Mainly because a formal phenomenon appears here that is absolutely unique for the time, namely the first real and very virtuoso solo cadenza in music history. Furthermore, the seldom interrupted two-part voice is typical of this period. This applies especially to the first part. After the cadenza, the second part is initially three-part, and then returns to two-part. Every now and then chords appear too. All of Scarlatti's art of modulation comes to the fore after the cadence. The entire sonata is cited here: 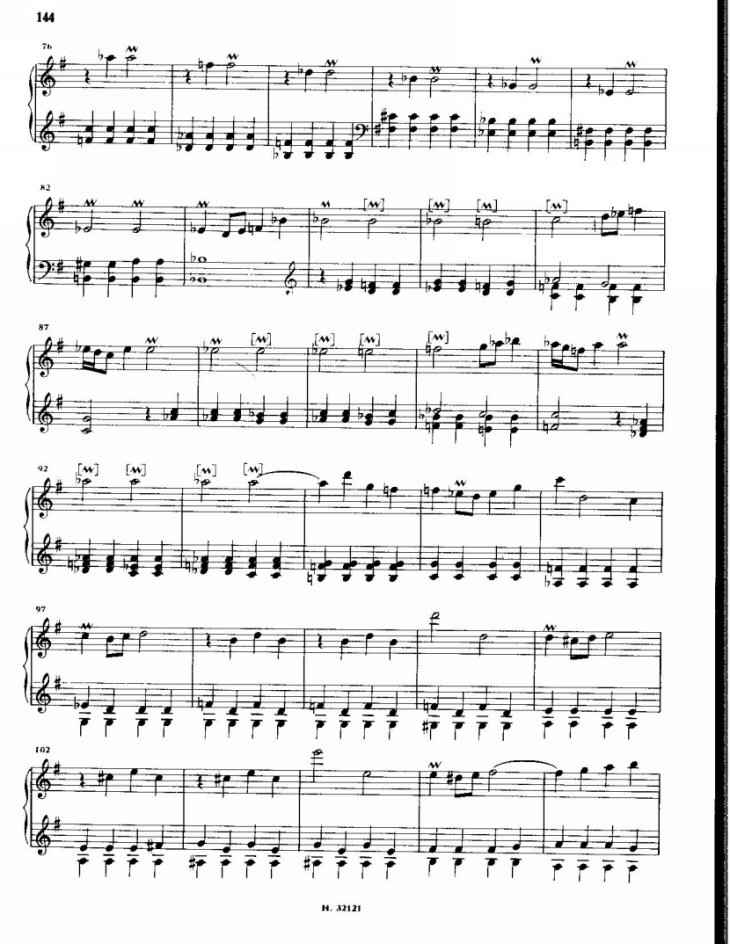 First of all, it should be noted that the passage with the parallel fifths from bar 76 is not correctly notated. Unfortunately, I am not familiar with the manuscript. In the Gilbert edition, this passage reads as follows:

The modulation moves from F minor to E flat minor and ends on the dominant B flat. The way it is then modulated back to E minor is unique. Via E flat major, C minor, A flat major, F minor, A flat major, C minor is finally reached. After two bars on the dominant G (from bar 98) an enharmonic transformation of the diminished triad of the 2nd degree of C minor appears. D-f-a flat is transformed into d-f-g sharp, the 2nd inversion of the diminished triad of the 7th degree of A major. The four-bar period of bars 98-101 is repeated a whole tone higher, then the basic key E minor is reached again, which is then no longer left.

Another extremely interesting point is the cadence after the half-close. In the sonata, which is otherwise relatively simple, this outbreak of unbridled virtuosity suddenly appears. The cadence is in two parts. Without modulation, two keys that are far apart from each other are set next to each other, namely A major and F major. The A major passage moves in sixteenth notes, in the F major passage the movement is accelerated even further by the use of 32th notes. The return to simple design could only be made musically credible through the complicated modulations already discussed. These are the signs of genius.